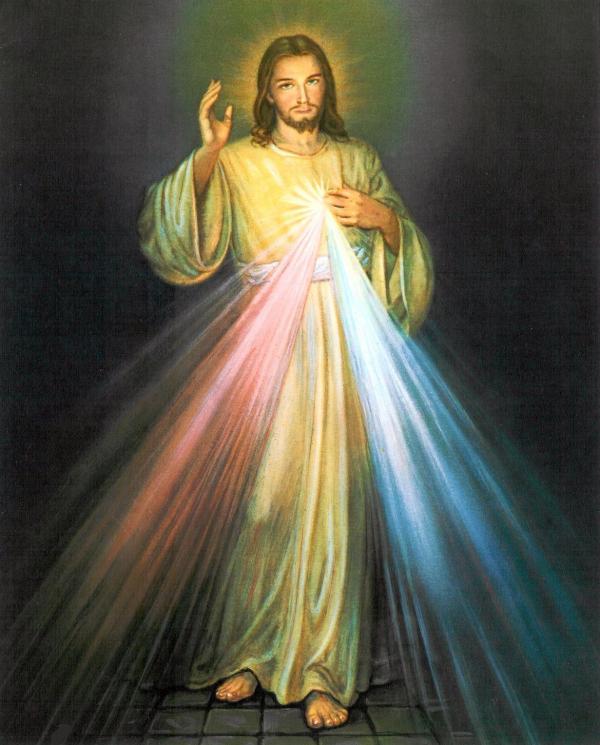 The Chaplet of the Divine Mercy

What is Divine Mercy?

"Jesus I trust in You" The Divine Mercy devotion is a modern devotion to the attribute of God's infinite mercy that was promulgated by St. Faustina Kowalska in Poland, and later to the  Universal Church by Pope St. John Paul II.
The earliest element of the devotion to the Divine Mercy revealed to St. Faustina was the painted image. She writes, "In the evening, when I was in my cell, I became aware of the Lord Jesus clothed in a white garment. One hand was raised in blessing, the other was touching the garment at the breast. From the opening of the garment at the breast there came forth two large rays, one red and the other pale. In silence I gazed intently at the Lord; my soul was overwhelmed with fear, but also with great joy.  After a while Jesus said to me,

'Paint an image according to the pattern you see, with the signature: Jesus I trust in You. I desire that this image be venerated, first in your chapel, and throughout the world.'" (Diary 47)

Jesus also taught St. Faustina prayers to implore his Divine Mercy  and to have a special feast day devoted to the attribute of his Divine Mercy.  He asked that the Feast of Divine Mercy be preceded by a Novena to the Divine Mercy which would begin on Good Friday.  He gave St. Faustina an intention to pray for on each day of the novena, the last day being the most difficult intention of all . . . those who are lukewarm and indifferent to his merciful love.
*
Jesus also told St. Faustina that the hour He expired on the cross is the hour in which to especially implore the attribute of his Divine Mercy, because at that moment his saving mission was accomplished and his blood and water was poured out on the cross for the sins of the whole world. Because Jesus made the 3 o'clock hour sacred, whenever the clock strikes this hour, his mercy can be efficaciously implored.
*
In response to Jesus' request for a feast honoring his Divine Mercy on the first Sunday after Easter, the Vatican has greatly encouraged the faithful to make use of this devotion.
*
On April 30, 2000, Pope John Paul II canonized her a saint, saying that the message of Divine Mercy she shared is urgently needed at the dawn of the new millennium.  In fact, St. Faustina was the first canonized saint of the new millennium.
*

4 Minute video about promises of Divine Mercy chaplet - especially for at the hour of death:  https://www.youtube.com/watch?v=ox3rAtwC37Y&feature=emb_rel_pause

4 minute video about What is Divine Mercy and why does it Matter:   https://www.youtube.com/watch?time_continue=23&v=kvx6TWLxRjQ&feature=emb_title

Office of Liturgy and R.C.I.A.